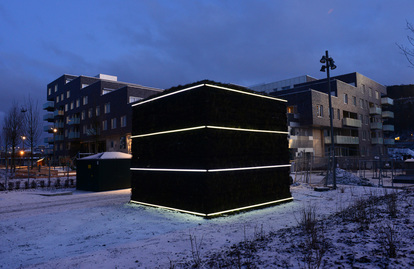 In their work DeFence, Christine Istad and Vigdis Storsveen address a number of topical, social issues relating to our globalised world, where human migration and encounters between cultures are becoming ever more significant. Structurally, DeFence is metonymically based on concepts of security and protection, but at the same time, the structure and materiality of the work metaphorically embrace positive values associated with migration: diversity, cultural enrichment and humanity. This social aspect finds a concrete and interactive expression through the site-specific location of the work in a public space. The work challenges the observer to reflect on the socially relevant questions it poses and even urges her to engage with other people who are in this same social space. By thematising and problematising encounters with "others", the work may be interpreted in the light of Julia Kristeva's theory that the individual herself is "the other". DeFence makes it impossible to maintain an absolute dividing line between "inside" and "outside" – or between the familiar and the alien.

The installation Defence consists of a square cube of 4x4x4 meters with walls consisting of reinforcing mesh and turf.
Construction: two squares, an inner and an outer, of reinforced wire mesh and welded together at the corners to render the construction stable. The turf is positioned between the two layers of wire mesh. The work will follow the different phases of the seasons throughout one and a half year. DeFence is constructed in such a way that it is impenetrable and impossible to see through. There is an inherent contrast between the reinforcement wire mesh and the green vegetation.


Location: Central on Sørenga pier in the new Central Park, a hub where many people travel daily. The installation is placed in a review sore where the public will be "forced" to deal with it. Defence will be changing through the seasons.


Phase 1: In the beginning of May, the plant will emerge only with a structure of steel reinforcing mesh.
Phase 2: In late May, the four walls of the plant would be built up of peat bags. The turf will contain a mixture of grass seed and meadow flower seeds.
Phase 3: In the beginning of June, the public and schools will participate by offset with cultivated meadow flowers.
Phase 4: Through the summer, the installation will look more and more lush and colorful as the flowers and grass grow out of the turf.
Phase 5: The fall will change the character of the plants wither and a winter solution will be installed on the installation. Winter solution consists of LED lights that follow the form of the cube.
Phase 6: Spring 2013, winter solution will be dismantled and the plant will again begin to sprout and become rich beyond the summer, the grass will dominate the work.

The audience has actively participated in the planting of the installation DeFence.
Future residents / public / schools have received seeds in advance of construction of the installation as they could put in pots at home. There was a workshop in March 2012 to inform / involve the public. During the first week of June, the public could work closely together with the artists.
Istad / Storsveen has been working with the Defence project for 3 years. In this process, they have worked with various professionals in different fields;
Trygve S. Aamlid from Bioforsk has provided advice regarding the planting of Defence. Bioforsk is a research institute with expertise in agriculture, food production, plant health, environment and resource management. Aamlid has a PhD in grass species engrapp, and he has worked with grass and seeds in various projects since 1986.

Support from: Nittedal Peat Industry and Nelson Garden.
Istad / Storsveen has collaborated with architects and engineers in the design of the structure.